Are Guns Legal in My State? 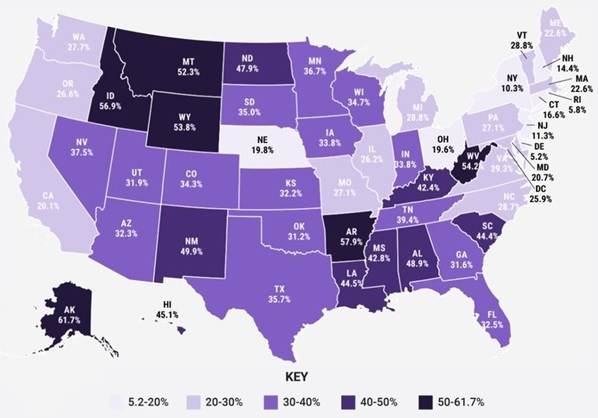 The number of civilian-owned firearms is within 270 million and 310 million - that's a gun for almost every man, woman, and child in America - and as of June of this year, studies have shown that 36% of all households have guns. Gun laws, however, would not see these numbers scattered randomly all over the nation as the map below will show you.

There's no telling what could happen if guns were outlawed and made unobtainable to homeowners. Considering the number of violent and property crimes committed each year, homeowners need to take proper measures to ensure their families' safety remains intact.

Over the course of a year, the FBI 2015 Crime Report found that the number of violent crimes increased slightly from 1.20 million to 1.21 million, while the number of property crimes decreased from 8.20 million to 7.99 million. The different crimes associated with both types have been outlined in the table below.

Overall, the numbers are staggering when you look at the rate of property and violent crimes in the major metropolitan areas. New York City has seen 352 murders and 2,244 incidents of rape last year. Chicago experienced around the same frequency of violent and property crimes in 2015: the count was 478 murders and 1,432 rapes. Los Angeles, another major metropolitan city, lost 282 lives to murder and nonnegligent manslaughter, and 2,209 were fallen victim to rape.

Moreover, of the 1.6 million burglaries that struck the nation last year, 57.9% of them involved forcible entry and an average rate of $2,316 stolen from each home. It makes you wonder had those victims carried a gun, would it have stopped the criminal from following through with their violent act? We will ask the question that you would when it comes to owning a gun for self-defense, the legal implications, and what precautions you can take to make sure that you never have to use it.

Are Guns Legal in Your State?

Gun laws are regulated by state-level representatives, so don't assume that the same gun laws apply to all states. The constitutions of all fifty states have similar stipulations to the U.S. Constitution's Second Amendment, except for California, Iowa, Maryland, Minnesota, New Jersey, and New York. All six of these states have slightly strict to very strict gun laws with shared requirements; these include mandates of having a permit for the purchase, ownership, and carrying of concealed handguns. Limits on magazine capacities apply, and private purchasers need to go through a background check before a transaction concerning a gun purchase is possible. California, Florida, Illinois, Texas, South Carolina, and New York, in particular, don't allow the open carry of a handgun where any casual observer could see.

Let's run through the strictest states again and see how the nuances of each state's gun ownership requirements compare with others.

States that Mandate Registration of All Firearms:

States that Mandate Registration of Handguns:

Are You Moving to Another State?

If you're relocating to a different state, you need to research how your destination state's laws differ from your own and how and if they clash with one another. Many occasions arise, for instance, with a state recognizing the concealed carry permit of a few states but not yours even if your state recognizes theirs. Some states don't even acknowledge concealed carry permits from any state besides themselves. Inform yourself before you move so you don't end up facing a court date.